Clark County is located in southern Indiana and named after George Rogers Clark. George Rogers Clark was an American explorer, soldier, Indian agent, and territorial governor. Along with Meriwether Lewis, Clark helped lead the Lewis and Clark Expedition of 1803 to 1806 across the Louisiana Purchase to the Pacific Ocean, and claimed the Pacific Northwest for the United States. Clark County was established in 1801 and is strategically positioned across the Ohio River from Louisville, Kentucky.

Clark County has diversified its economic base and continues to expand in exciting new directions. River Ridge Commerce Center© is an example of a new wave of economic redevelopment taking place in the county. The River Ridge Commerce Center© was formerly the Indiana Army Ammunition Plant. The plant manufactured gunpowder during World War II, the Korean War, and the Viet Nam War. Congress declared the property surplus to its needs in 1998 and authorized 6000 acres of the property to be conveyed to the River Ridge Development Authority for economic development and other parts of the property to be used for expansion of the Charlestown State Park.

We invite you to view and enjoy our website and we look forward to seeing you in Clark County.

The Commissioners Office is pleased to announce that Clark County Trick or Treat day/time will be Sunday, October 31st from 6:00pm - 8:00pm.

Report a Road Hazard on a County Road

Please Note: For roads within the City of Jeffersonville, or within another city/town in Clark County please contact them directly. 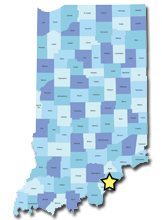